Chippendales vs. Thunder from Down Under

You are here:
male revue 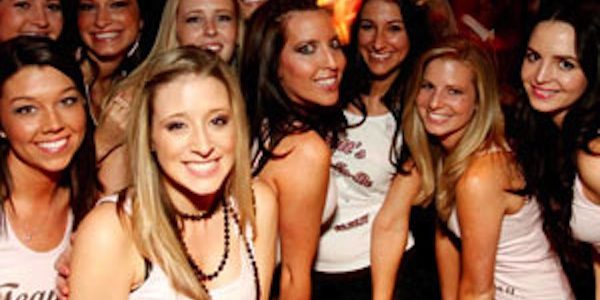 The Battle of the Revues

Well ladies, here you are. At a crossroads that you never thought you’d find yourself at. Ahead of you, there is one of the most important events of your best friend’s life – her bachelorette party – and on either side, a forking road. To the left, you have the scrumptious boys of the long-running Chippendales Male Revue. On the right, you have the hunky beauties that make up Australia’s own Thunder from Down Under. You don’t want to make the wrong choice, as you’d hate to be the one that really screws up this event.

We here at Bachelorette Vegas are going to offer you a service that you won’t find anywhere else. We will break down these two shows, and from there you can make your own educated decision; a decision that you would have not made lightly, and one that will undoubtedly appease your girlfriend for years to come.

Over Thunder from Down Under, Chippendales has tenure. The production started in the late 1970’s as a small introduction into what quickly blew up into the “male revue”. High standards and rigorous training kept these men perfectly toned for their spot on the main stage, ensuring that there would be no disappointments once the white tank tops come off and all that’s left is the signature bow tie and shirt cuff.

While Chippendales focuses a lot on men dancing, there are some little sidebars of entertainment, including a mock of “The Dating Game”. Interactivity takes play during this brief segment as three lucky ladies are pulled from the audience to join the delicious men on stage. Their prize? A little up-close and personal attention from some of the show’s able-bodied men.

Audience interactions don’t stop there, and the Chippendales troupe has been around long enough to know that appeasing their fans is the best means of having a long lasting show. On occasion, the boys will take to the audience to get a little closer to their most grateful of fans. Bachelorettes that make themselves known are more than likely to be on the receiving end of some much-deserved attention.

Amidst all of this fun, the men do take to the stage for a little fantastical dancing. Each of the ten performers will take on a female fantasy, such as the sweating construction worker or the uniformed police officer. Chippendales has been around long enough to know what women like, and they make no quarrels about exploiting it.

THUNDER FROM DOWN UNDER

Sounds like Thunder has a lot to compete with, right? Well, these Australian hotties have no problem standing up to the longer running Chippendales’ production. On top of their outwardly sexy accents, the men of Thunder are toned and ripped to Greek God perfection.

While Chippendales adorns its men with a signature “costume”, the crew of Thunder from Down Under have only their toned bodies to be their staple outfit. Sure, they start out fully clothed, but once the music starts rolling, the articles start falling – until there is literally nothing left to shed. Thunder from Down Under treats itself more like a male revue, with a full line-up of memorable songs like “Proud Mary” and a spot on tribute to the greatest heartthrob, James Dean.

There is some audience interaction, though, in the form of a “fake orgasm” contest and some one-on-one grinding, but Thunder does its best to cater to the entire audience with its expertly choreographed dance routines. Throughout the show, the men of Thunder will show their lighter sides with tributes to men in uniform, which includes a spot on rendition of The Village People.

From the memorable, recognizable, and completely danceable tunes to the lighthearted audience interactions, Thunder from Down Under puts a different spin on the male revue, ensuring that the audience will both swoon and laugh as often as humanly possible.

Now you that you’ve had a little insight to both shows, you can make that educated guess we were talking about. Looking back, I guess it’s still a difficult decision to make; but we don’t think there will be any issue with your bachelorette regardless of which show you pick. Both are top quality productions that offer gorgeous men and a memorable good time.

So maybe we weren’t as good of a help as we had wanted; but we can offer you packaged deals for either of these top rate shows. Check us out here for details on limousine transfers and an entire night of entertainment.

The Best Bachelorette Parties are at Hunk Mansion
August 10, 2013